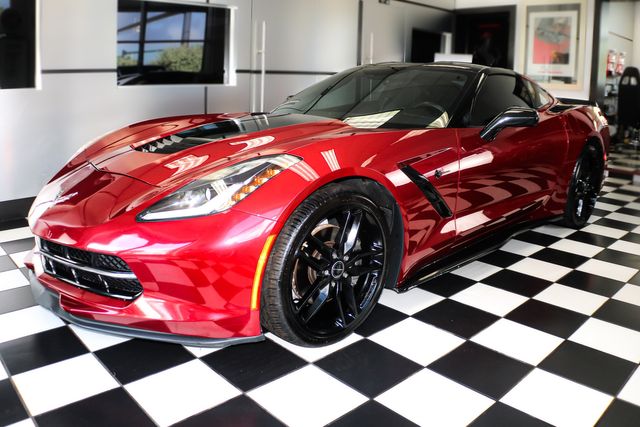 *This calculator is for informational use only and is based on the information you provide. Actual loan amounts and payments will vary based on additional items such as taxes and fees as well as the actual interest rate available to you from a financial institution.

The car is clean car fax, a Crystal Red Tintcoat color that literally catches everyone`s eyes wherever it goes.

This Corvette is equipped with side skirts, which gives the car a very sharp look. And let`s not forget about the glass rooftop, believe me, driving at night time being able to look at the starts is definitely a plus!

The 2015 Chevrolet Corvette lineup sees the new-generation debut. More relevant to most shoppers is the introduction of an optional eight-speed automatic transmission across the lineup (including the previously manual-only Z06), replacing the lackluster six-speed automatic that carried over last year from the previous C6 generation.

But the new Corvette's fundamental excellence continues to be the real story, from its vastly improved interior to its unprecedentedly capable -- and approachable -- handling. You can even squeeze 30 mpg out of the base engine on a highway cruise if you try hard enough.

With its improved automatic transmission and reinvented, the 2015 Chevrolet Corvette bolsters its credentials as the world's best performance-car bargain.

The 2015 Corvette gets an eight-speed automatic transmission option (replacing last year's six-speed). The Corvette Stingray is powered by a 6.2-liter V8 that drives the rear wheels. Maximum standard output is 455 hp and 460 pound-feet of torque, while the optional performance exhaust bumps those numbers to 460 and 465, respectively.

The naturally aspirated V8 in the 2015 Chevrolet Corvette Stingray is so powerful and flexible that it's a dream engine in its own right. Midrange torque is prodigious and, should you put the hammer down, you'll be at redline before you know it. That spirited performance is accompanied by a glorious symphony trumpeting from the exhaust's quad tailpipes, should you opt for the dual-mode exhaust.

Either way, the 2015 Corvette's steering provides excellent feel and response, while grip is extraordinary from the base tires and just gets better from there. The adjustable traction and stability control systems also allow drivers to approach the car's handling limits safely.

A dial on the center console of every 2015 Corvette lets you choose from five different drive modes (Weather, Eco, Tour, Sport and Track) that tweak steering, throttle, transmission and stability-control calibrations, depending on trim and equipment. The standard 8-inch touchscreen display utilizes Chevrolet's latest MyLink electronics interface, which includes smartphone integration for useful apps like Pandora and Stitcher. There's also a cool 8-inch customizable display in the gauge cluster that has a different layout for each drive mode you select.

- Current mileage may vary due to test drives and vehicle relocation.

CALL US TODAY TO SCHEDULE A TEST DRIVE